Adlai Stevenson — The Statesman in My Family

“Adlai Bares His Sole”, also known as “Adlai’s Worn Sole”, photograph of Adlai Stevenson at a campaign appearance in Flint, Michigan during the 1952 U.S. presidential campaign with a hole worn through his shoe. Pulitzer Prize-winning photograph by William M. Gallagher from ”Flint Journal” (Michigan), September 2, 1952.

Around the time I was 10 years old, my mother began to tell me tidbits about our family tree. The one tidbit that really captured my attention was her declaration that Adlai E. Stevenson II, who at that time was the U.S. Ambassador to the United Nations, was our distant cousin. She even pulled out the much revered “Stevenson Book” which contains our ancestry, to show me the proof. I was enchanted.

And so, I sat down and wrote a letter to Mr. Stevenson informing him that he had a 10-year-old cousin in Rock Hill, South Carolina — me! I sent my letter off, went outside to play and pretty much forgot about it. So imagine my surprise when, months later, I received a letter with the return address of 799 United Nations Plaza, New York, New York, that was stamped “OFFICIAL BUSINESS.” I mean, receiving a letter at a 10 was pretty remarkable, much less one from the United Nations!

My mother helped me to carefully open the envelope, and I was thrilled to read the letter from my very special cousin:

Thank you so much for your nice letter.  I’m always delighted to hear from another member of the Stevenson family and am happy that you took the trouble to write and tell me we are cousins. I don’t ordinarily approve of bragging, but I’m inclined to do it, too — about my relatives!

Many good wishes to you and all the family.

And It Was Personally Signed by Adlai E. Stevenson!

I was over the moon! I felt so very special!

I am so glad that my wise mother saw fit to save the letter and preserve it carefully.  Today it is framed and hanging in our home office.  Adlai Stevenson suffered a massive heart attack about a year later and died. But my admiration and affection for him still live on. It is my opinion that he was most likely the last true statesman in our country. 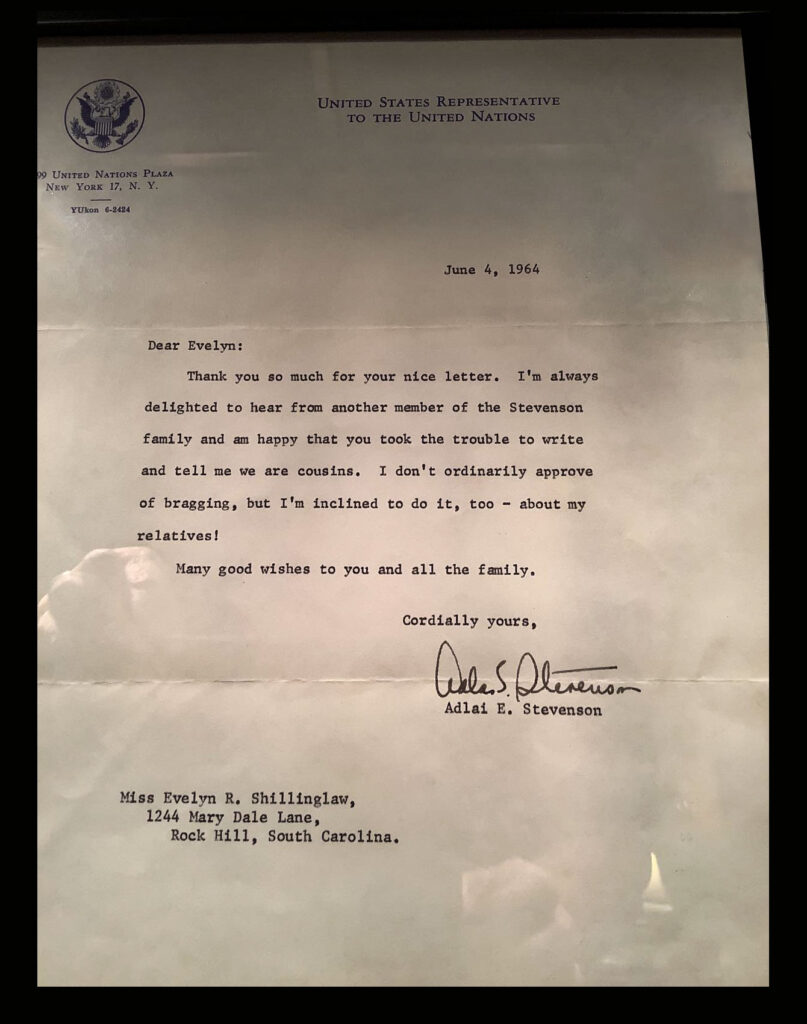